To the top of the mountain and back, NOREX 44 members embrace the Norwegian winter 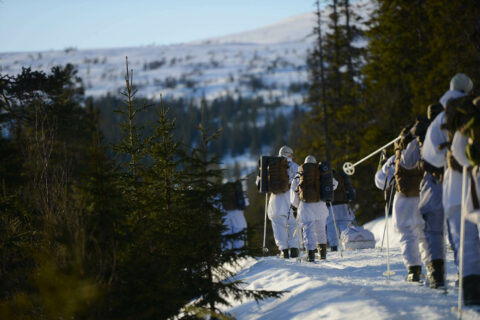 HALTDALEN, Norway (Feb. 21, 2017) – After two days at a base camp near Haltdalen, Norway, Minnesota National Guardsmen participating in the 44th Norwegian Reciprocal Troop Exchange were ready for the most challenging aspect of their four-day field training exercise – a ski march up the mountain.

It was Day three of the FTX, meaning members of the 44th Norwegian Reciprocal Troop Exchange had slowly adjusted to surviving and thriving while living in a winter environment and also honed their skills on cross country skills well enough to begin a climb that would take nearly three hours.

“Our goal was to get you to know how to use the winter, see how the Norwegians use the winter, and how we survive the winter so we can conduct combat,” said Vidar Aune, one of several members of Home Guard 12 guiding the Minnesota National Guard Soldiers and Airmen during their training here. “By getting the experience living outside in the snow, you manage to survive it and handle it quite well.”

Now having made it up the mountain, a new survival technique would be put to practice as Soldiers and Airmen dropped their skis and grabbed shovels to dig out the coming night’s shelter.

After Norwegian experts tested the snow to ensure it was both safe and practical for building a snow cave much earlier in the week, the U.S. contingent first took a tour of a demonstration cave, then headed to their hole to begin the dig.

“We start by digging two holes in the snow simultaneously, then we kind of turn inward and meet together and start digging the bed,” said 1st Lt. Jeffrey Smith, a platoon leader here and member of the 2nd Battalion, 147th Assault Helicopter Battalion. “It’s about five-to-six degrees warmer in here than outside, and once you get a couple bodies in here it will go up a couple more degrees.”

With some of the caves still being completed by nightfall, work had nearly wrapped up before Americans and Norwegians climbed the top-most peak to watch the sun set. Following a long day of physical activity, with the wind blowing and temperature dropping, all members of NOREX 44 looked forward to spreading out in the relative luxury of the snow cave shelter.

The next day, an even more treacherous journey back down the mountain would begin, signaling the end of the four-day FTX.

“It’s been great, I’m really not an outdoors person like this so I’m stepping out of my comfort zone a little bit and it feels good,” said Sgt. Sean Mayberry, a member of the Joint Force Headquarters Medical Detachment. “They do a lot of hard work, some of the things we watch them do we’re just like, ‘Wow, man!’ You got to have a lot of endurance, I know that.”

“The first few days we were learning how to ski, falling a lot,” said Spc. Grace Wegleitner, with the 34th Combat Aviation Brigade. “We were making fires and building shelters, learning their techniques for how to stay warm and survive in the Norwegian winters.

“The Norwegian people are very knowledgeable. It’s awesome being around them. They want to teach us the language, and they want us to taste their food, and especially techniques they’ve learned in the military, they want to teach to us.”

“That is why we are up here, to share some of our basic knowledge of how to survive without having too hard of a time and have the ability to focus on the tactical things,” said Maj. Gard Ommedal, the officer-in-charge for the Norwegian Home Guard instructors and commander of the Home Guard 12’s Rapid Reaction Force. “We are not focusing on the tactical things now but only the basics – how to actually be comfortable in winter.”

Up next for the U.S. contingent – following warm showers and a change of clothes – the American Meal night will be celebrated, providing an opportunity for Minnesotans to host an evening meal with steaks donated by Serving Our Troops. The contingent will then head their separate ways for buddy and staff weekends, spending two days living with Norwegian families and becoming more immersed into the culture.

With only a few short days of weapons training and a couple of sightseeing tours, Soldiers and Airmen of the Minnesota National Guard’s NOREX 44 will complete their training event and head home with a new appreciation for their Norwegian allies. 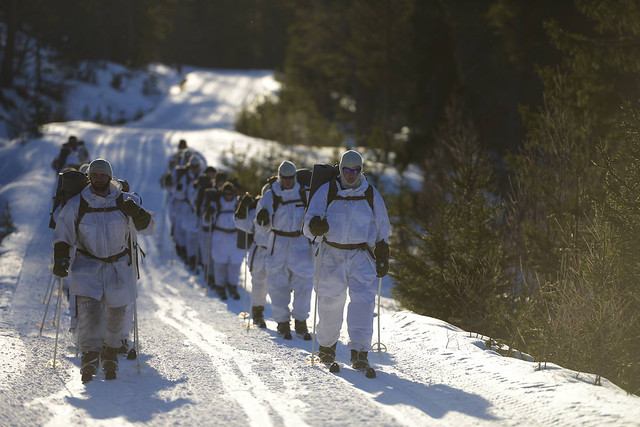