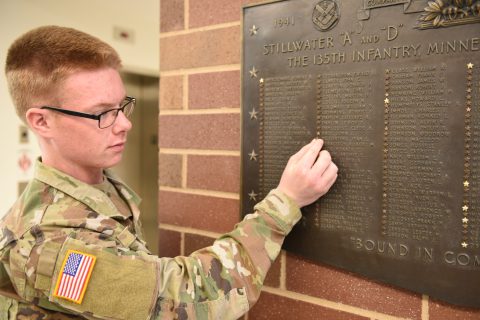 The final commemorative star was ceremoniously applied to the Last Man plaque by Pvt. Coty Ross, 17, the newest Army National Guard recruit to serve in the Stillwater armory. He recently returned from U.S. Army Basic Training and will go to Military Police Advanced Individual Training next summer after graduating high school.

Stillwater’s Last Man was Pvt. 1st Class Jean L. DeCurtins who passed away Aug. 14, 2019 at the age of 100. “He was a very distinguished veteran,” said Maj. Eric Lewanski, Officer In Charge, 334th Brigade Engineer Battalion. “He was awarded three Bronze Stars, two Purple Hearts for his service in Africa and Italy during World War II. Jean was part of the armory grand opening here and was part of the Veteran community in Stillwater since WWII.”

DeCurtins was in Stillwater’s D Company, 135th Infantry Regiment, 34th Infantry Division. Prior to his death he was the last man in Stillwater’s “A and D Last Man Club” which was comprised of soldiers from A and D Companies who trained together at the Stillwater Armory as part of the Minnesota National Guard and were activated together for service in World War II.  DeCurtins was the last man from the World War II group.

“Each war had its ‘Last Man’s Club’ in Stillwater,” explained Maj. (Retired) Jack Johnson, the committee’s chairman. “The surviving Veterans would get together every year to honor their colleagues who passed away that year.”  The “H and H Last Man’s Club” is made up of men who trained together at the Stillwater Armory and were activated in 1951 for the Korean War.  “H and H” still exists and has about a dozen members still living.

Attending the ceremony was Brig. Gen. (retired) Lyle Doerr. His is one of the names cast on the “H and H” plaque. He is also a member of the Stillwater Military History steering committee which is responsible for the armory’s historical displays. Bob Dettmer of the Minnesota House of Representatives was also present for the ceremony and was later given a guided tour of the armory’s historical displays.