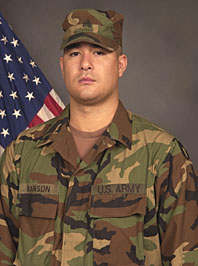 Joshua Robert Hanson was born August 22, 1979, in Fergus Falls, Minnesota, the son of Robert and Kathy (Elizondo) Hanson. In November 1979 he was baptized at the Lady of Guadalupe Catholic Church in St. Paul, MN. He grew up in rural Dent, MN, and was confirmed at St. Henry’s Catholic Church in Perham, MN. On December 16, 1996, he joined the National Guard during his junior year in high school at the age of 17. In 1997 Josh and his teammates on the Pelican Rapids football team won the state AA championship. He graduated from Pelican Rapids High School in 1998. In May of 2005 Josh graduated with a degree in criminal justice at Minnesota State University Moorhead. He completed a program of law enforcement skills at Alexandria Technical College. His goal was to become a deputy for the Otter Tail County Sheriffs Department.

Josh completed a six-month deployment to Bosnia two years ago. His second tour of duty overseas began October 1, 2005, when his company left for six months of training in Camp Shelby, Mississippi, before deploying to Iraq in March. Josh was a member of the Minnesota National Guard assigned to Company A, 2nd Combined Arms Battalion, 136th Infantry stationed in southern Iraq. A 10-year National Guard member, Josh was killed instantly when a roadside bomb exploded near his Humvee during a mission outside Ramadi, Iraq.

Josh enjoyed pheasant, duck and deer hunting with his father and brother. He also enjoyed listening to music, reading, and spending time with his friends. Josh earned a black belt in Tae Kwon Do in Pelican Rapids during his high school years. He was a member of the Knights of Columbus in Perham.