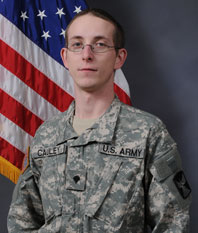 Spc. George Cauley died October 10, 2009, at Bagram, Afghanistan, of injuries sustained from an Improvised Explosive Device attack on October 7, 2009, while serving as a member of the 114th Transportation Company. SPC Cauley’s convoy was enroute to the 2nd Marine Expeditionary Brigade at FOB Dwyer in the Helmand Province of Afghanistan when his vehicle struck an IED.

Cauley was born March 13, 1985, in Crosby, Minnesota, and graduated from Northland High School in Remer, Minnesota, in May 2003.

Cauley enlisted in the Minnesota Army National Guard on March 20, 2002, at the age of 17, as an M1 Armor Crewman. He deployed to Afghanistan in 2009 as a Heavy Vehicle Operator with the 114th Transportation Company.