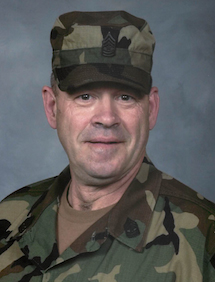 Sergeant Major Tellock’s military service began when he enlisted in the United States Navy on 8 February 1962. He served on active duty until 18 June 1965 when he transferred to the U.S. Naval Reserve. He served in the Navy Reserve until 7 February 1968 when he was honorably discharged. He had a break in service before joining the Minnesota Army National Guard on 20 February 1973.

During his 30 year career with the Minnesota Army National Guard, Sergeant Major Tellock distinguished himself in a variety of positions, stating as a Cannon Crew Member and then transferring to the Military Police Corps where he had a number of noteworthy leadership assignments to include: First Sergeant, 257th Military Police Company; Intelligence and Security Sergeant Major, STARC; Operations Sergeant Major, STARC; and Joint Military Affairs (JMA) Sergeant Major, 34th Infantry Division. Additionally, Sergeant Major Tellock distinguished himself as the Noncommissioned Officer In Charge (NCOIC) of Operation Ice Eagle, the Minnesota National Guard Airport Security mission following the 9/11 attacks. He then transitioned from NCOIC of Operation Ice Eagle to NCOIC of the Canadian Boarder Security Mission in support of Operation Noble Eagle.

During his military career, Sergeant Major Tellock served with distinction in a number of overseas deployments to include: Korea in 1986, 1988 and 1989; Panama in 1989 and 1994; and Bosnia-Herzegovina in 2003 as the JMA Sergeant Major, 34th Infantry Division; Task Force Eagle, part of the NATO Stabilization Force (SFOR) where he ultimately died in service to his country on 20 September 2003.

Sergeant Major Tellock served on numerous State Active Duty missions, encompassing natural disasters, civil disturbances, and security missions, most of these while serving as the NCOIC of the Military Support Operations section. His knowledge, leadership, and vision lead to the successful execution of these missions.

Sergeant Major Tellock was a soldier’s soldier. His priority was to make sure soldiers were properly trained, disciplined and administratively cared for. He was candid in his opinion, conscientious, and always professional. His booming voice and contagious laugh would announce his presence wherever he went.

He was an active member of the Ham Lake VFW and the Minnesota National Guard Enlisted Association. He spent much of his free time supporting military members, veterans, and the community through his VFW activities.