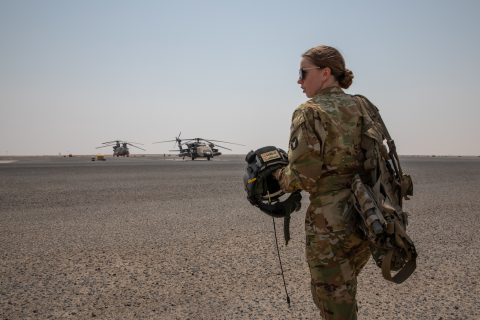 This aviation brigade provides the majority of aviation assets and support to 15 locations within five different countries in the Middle East. Their mission was substantial from the start and the Soldiers of the 34th ECAB, coined “Task Force Red Devils” for the 2019-2020 deployment, faced the challenges head-on.

“Task Force Red Devils were eager to get into theater and begin our mission supporting Combined Joint Task Force-Operation Inherent Resolve (CJTF-OIR) and Operation Spartan Shield (OSS),” said Col. Gregory Fix, 34th ECAB commanding officer. “Four and a half years of training, including Combat Readiness Center rotations for our battalions and War Fighter exercises, prepared us well. Two months of mobilization station brought us together as a team.”

Having assumed Operation Inherent Resolve’s mission to ensure the lasting defeat of Daesh, the ECAB found itself at the forefront of the airstrike events surrounding Major General Soleimani on Jan. 3, 2020.

In the days following the transfer of authority ceremony, the aviation unit was notified that Iran had launched several theater ballistic missiles targeting Coalition bases housing U.S. personnel at multiple bases in Iraq. Using aircraft to assist in the rapid reduction of personnel at the Joint Operations Center – Iraq and the Baghdad Diplomatic Support Center, the Soldiers of the 34th ECAB acted swiftly and efficiently to preserve life and property while continuing to support their new mission.

The aftermath of the theater ballistic missile strikes only heightened the state of readiness at Al Asad Air Base, Iraq. The ECAB’s Grey Eagle unmanned aircraft systems (UAS) detachment, led by the Delta Company, 82nd Aviation Regiment, took the brunt of the explosions with equipment, military supplies and most personal items destroyed in the strike. However, with early warnings from the ECAB’s intelligence section, all service members took cover during the strike and there was no loss of life. After the dust settled, the 82nd Aviation Regiment Soldiers immediately took steps to resume the mission with little delay.

This attack served as the first and largest of many aggressions the 34th ECAB Soldiers would face in the months to come.

“Our Gray Eagle unit, Delta Company, 82nd Aviation Regiment, demonstrated strength and agility following the attack on Al Asad Air Base,” said Fix. “They emerged from their bunkers and recovered all aircraft. They never gave up.”

The ECAB and members of the Coalition stationed at Camp Taji honored the fallen with ceremonies for the two U.S. service members who died in the March 11 attacks and held memorial ceremonies for Spc. Mendez Covarrubias at both Camp Taji and Erbil, Iraq.

“The loss of Spc. Mendez impacted the entire formation, and we are still in mourning,” Fix said. “After the rocket attacks, accountability and [force] protection were the key focus for the brigade and the base. We learned much from the attacks on how to respond, depending on a Soldier’s location, for the best survivability which proved beneficial during future attacks and gave Soldiers more confidence.”

Additionally, the COVID-19 pandemic forced an extension of deployment to the service members of the ECAB. Still the unit carried on, adjusting course as needed and making the most of what the mission called on them to do.

“As a brigade we are committed to reliability and flexibility for our customers in CJTF-OIR and OSS,” said Fix. “Our battalions, namely 2-147th Assault Helicopter Battalion, 1-189th General Support Aviation Battalion and 834th Aviation Support Battalion worked hard to adjust to several big changes and made constant organizational adjustments. I am very proud of how they responded.”

Closing Camp Taji was a significant feat for the ECAB. The unit needed to move its own equipment out of the base, but also ensure that facilities used by the Coalition were in top condition before being returned back to the Government of Iraq. This required a drastic increase in fixed wing traffic to move over three million tons of cargo via air transport. It also called for the airfield runway to be repaired in 142 individual spots from routine wear and tear, all on a condensed timeline of two months, a third of the originally projected timeline.

“It took the entire aviation brigade and additional units to transfer Camp Taji to the Government of Iraq,” Fix recounted. “To do this in less than 90 days is a testament to our Soldiers work ethic. My deputy commanders for the base were outstanding, especially Lt. Col. Mark Tyndall and the 168th Military Police Battalion, Tennessee National Guard, who took on the base management with me all the way through to the transition back to the Government of Iraq.”

The successful base transfer ceremony of Camp Taji from Coalition control to the Government of Iraq took place Aug. 23, 2020. With its conclusion, the remaining Task Force Red Devils Soldiers flew to their new headquarters at Camp Buehring, Kuwait, where they would continue to establish their foot print for the brigade and await the arrival of their replacements.

The 34th ECAB will hand over their aviation mission for OIR and OSS to the 28th ECAB at the end of September 2020. The incoming task force also consists of several states with their headquarters unit coming from the Pennsylvania National Guard.

“I’m looking forward to having the 28th ECAB deploy safely to the Middle East and to successfully provide aviation capabilities that will assist U.S. Central Command’s mission of increasing regional security and stability that is in support of U.S. interests,” said Col. Howard Lloyd, 28th ECAB commanding officer. “Our aim is to maintain the brigade’s high level of readiness throughout the deployment and, most importantly, to send everyone home safely at the end of our mission.”

With redeployment the next and final mission for the 34th ECAB, Fix reflected on the performance and character of the service members under his command.

“Task Force Red Devils operated in a volatile environment at the beginning of the deployment,” said Fix. “[They continued supporting] the mission through injury and loss of life. Our Soldiers and Airmen never gave up, transitioning through uncertainty and always accomplishing the mission.”