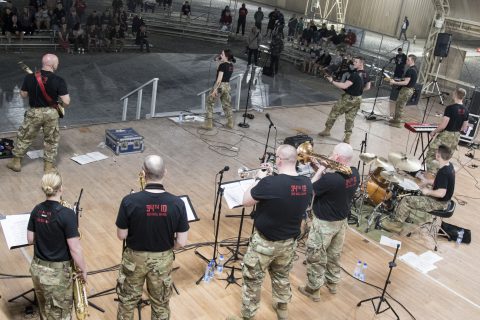 The Red Devil Rock Band performed a show in support of service members based at Camp Arifjan during its annual training March 16, 2019. The band is part of the 34th Red Bull Infantry Division, which is currently mobilized at Camp Arifjan.

“What’s unique about this is that it’s Soldiers performing for Soldiers,” said Chief Warrant Officer 2 Jim Baxter, bandmaster, 34th Red Bull Infantry Division Band, Minnesota National Guard. “What we’re supposed to do as an Army band is support our fellow Soldiers, be an outreach entity while we’re here at Camp Arifjan.”

Last year, Army musicians found out they were scheduled to mobilize. However, as the mobilization date approached, they received news it had been cancelled.

“It was tough, so we continued to seek ways to come over,” said Baxter, “what if we spent our AT here?”

Army musicians with the band received the opportunity to mobilize during their annual training.

Even more unique is an Army band mobilizing for its annual training. Only a select few Soldiers from the 34th Red Bull Infantry Division Band mobilized during this tour.

“Just the fact that our band was chosen is really awesome,” said Penner. “A lot of Army and National Guard bands don’t get to go overseas and perform at shows.”

Army musicians with the band play cover songs so that service members receive an experience to feel like they’re at home for a short while. Attendees of the show danced and sang to familiar songs for several hours throughout the night.

“I was thrilled to see people get up and dance, really engage during the show and have a good time,” said Penner. “It’s not always the case because sometimes it’s hard to get a crowd to join you in the music, so I had so much fun dancing around with everyone.”

The band performs rock, country and pop music. They perform for service members who are deployed or at home.

Members of the band have to maintain all Soldier requirements throughout the year. The band rehearses during drill weekends in Rosemount, Minnesota.

“What makes it special is that we’re actually Soldiers who’ve gone through auditions, basic training and AIT (advanced individual training) together,” said Baxter. “Tonight was special because they performed for their division.”