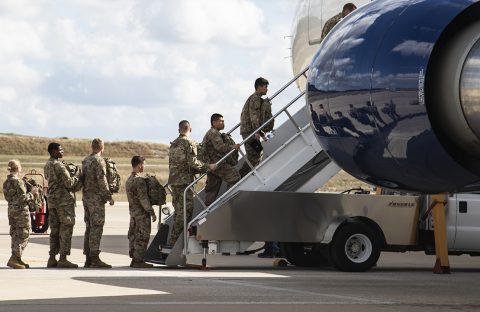 CAMP ARIFJAN, KUWAIT – More than 600 Citizen-Soldiers of the Minnesota National Guard’s 34th Red Bull Infantry Division have arrived in the Middle East as they begin a nine-month long deployment to the region. The Minnesota unit will be responsible for leading Task Force Spartan which is focused on building partner capacity, regional self-reliance and increase security.

Knowing that trust cannot be formed just in times of crisis, Task Force Spartan is about fortifying relationships over time, said Master Sgt. Gregory Byrd, non-commissioned officer in charge of future operation. It is a show of the United States’ commitment to our partners to achieve a greater level of trust as well as working towards greater regional stability.

Since arriving overseas, the Red Bulls have assumed their posts at US Central Command locations throughout the Middle East. 34th ID Soldiers are using the time before the Transition of Authority to meet with their counterparts of Pennsylvania National Guard’s 28th ID that they will be replacing to ensure the smooth shift of operational command and control of Operation Spartan Shield.

The Red Bulls are responsible for mission command of Task Force Spartan, which spans 20 countries through 6 time zones, with 22 ethnic groups speaking 18 different languages and a total population of over 550 million people.

“It’s all about building relationships with our partner nations,” said Byrd. “We are ready to start operating at our normal battle rhythm and get to work at the job we have been training to do.” 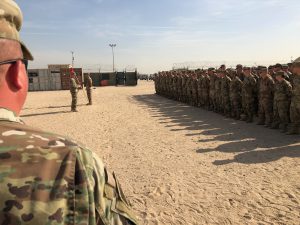 This comes after nearly a month of pre-deployment training at Fort Hood, Texas, where the Red Bulls completed a vast array of training that has prepared them for their deployment to the Middle East. From completing soldier readiness processing to firing their assigned weapons at the ranges, the Red Bulls fulfilled all tasks and requirements prior to making their way to USCENTCOM’s area of responsibility.

During their time at Fort Hood, the Red Bulls conducted a Culminating Training Exercise with 1st Army acting as Observer, Controller, Trainers. This CTE is utilized to transition the Division to the stable command and control operations they will experience overseas as opposed to its most recent training for unified land operations during warfighter at Camp Atterbury, Indiana.

“What we are deploying to at Camp Arifjan is much more of a stable situation, so this exercise allowed us to re-calibrate, identify additional sections that need fine-tuning, as well as retraining ourselves for a more partner oriented day-to-day operational mission,” said Brig. Gen. Charles Kemper, the Deputy Commanding General for Support of the 34th Red Bull Infantry Division.

Improving the ability to work with partner nations is a high priority within USCENTCOM’s AOR. The exercise revealed the divisions readiness to impact their operating environment in a way that positively affects the U.S. and partner nation interests.

“The CTE was a great exercise to get us used to the battle rhythm and training we will be conducting while we’re in Kuwait as part of Task Force Spartan,” Byrd said.

“I feel like we are ready,” said Kemper. “We’re sharpened to a keen edge to this point, we’re calibrated to our operational pace, and we have Soldiers that are well trained at the mission they will be conducting.”