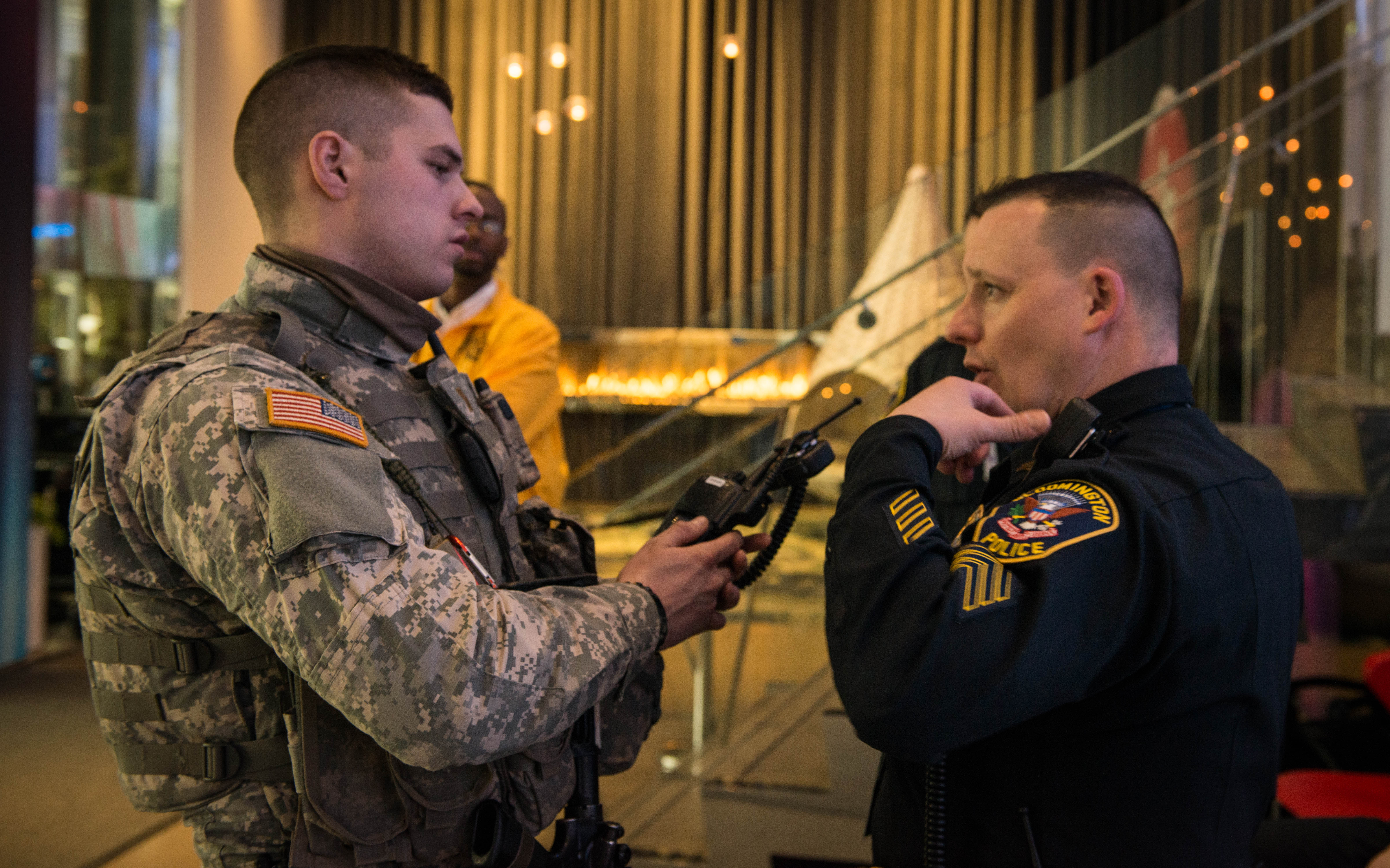 The Minnesota National Guard is continuously making security upgrades and improvements to its facilities and infrastructure to ensure the safety of the Guardsmen who serve in our organization. We maintain detailed plans and conduct training to ensure we are ready to respond to any potential threats to safety.

In 2019 in an effort to start a conversation around sexual assault and harassment within the force, the Minnesota National Guard held town hall events across the state. The adjutant general spoke about where the organization currently stands in regards to sexual assault and the steps we will take on the issue moving forward.

As part of the event, the organization released publicly, for the first time, its numbers of sexual assault cases between 2014 and 2018. In that five-year period, the Minnesota National Guard received 90 reports of sexual assault. Of those reports, 39 were restricted reports. Restricted reports are an option for survivors to receive support services
without triggering an investigation and without details about the survivor or the incident being disclosed. Of the remaining 51 unrestricted reports, 35 cases involved Minnesota National Guardsmen as both the victim and the offender.

The adjutant general assembled a team to review all of the Minnesota National Guard’s internal policies and processes in relation to sexual assault prevention and response. The team will review all former cases and solicit input from survivors and responders as to how the organization can improve.

The town hall events are just the first step as the Minnesota National Guard seeks to enter the larger conversation about sexual assault in the community by engaging with local agencies and organizations to come up with better solutions to address this complex issue.

The Minnesota National Guard continues to expand and improve its capabilities to maintain and defend Department of Defense networks, as well as provide subject matter experts who collaborate with government and industry leaders to improve information security and protect critical infrastructure at all levels.

The Minnesota National Guard completed a Command Cyber Readiness Inspection (CCRI) in 2019, earning scores above the National Guard Bureau average for both non-classified and secret systems. The inspection assesses an organization’s cyber defenses and vulnerabilities in order to improve the overall security of the information network.

Soldiers with the Minnesota National Guard’s 177th Cyber Protection Team participated in several exercises in 2019 including Locked Shields, one of the world’s largest and most complex real-time cyber defense exercises hosted by the NATO Cooperative Cyber Defense Center of Excellence. Minnesota is just one of four states with a fully-staffed Cyber Protection Team. The team is preparing to mobilize in 2020.

In August, six members of the Minnesota National Guard traveled to Croatia to complete a five-day network defense exercise for members of the Croatian Armed Forces as part of the National Guard’s State Partnership Program. This year’s event was the eighth technical cyber training event
between the two nations.

Soldiers and Airmen from the Minnesota National Guard also attended a cyber symposium in Croatia in August where they shared best practices and learned from Croatian cyber experts. This was the sixth cyber symposium coordinated between Minnesota and Croatia and included a faculty member from Metropolitan State University who presented to the group.

Providing cybersecurity education and awareness is one of the key tasks in the partnership’s ongoing efforts to counter transnational threats.

On the cyber front, the Minnesota National Guard continues to expand and improve its capabilities to maintain and defend Department of Defense networks, as well as provide subject matter experts who collaborate with government and industry experts to improve information security and protect critical infrastructure at all levels.

In May, the Minnesota National Guard participated in Cyber Shield 2018, a National Guard Bureau exercise that involved specialized training as well as simulated exercises to test the ability of information technology specialists to solve problems and secure networks. In the Cyber Defense NetWars Challenge, a Minnesota team placed first out of 30 teams. The defensive cyber team partnered with Xcel Energy during a simulation to defend their notional network and assisted them in producing a risk management plan for their cyber operations.

The Minnesota National Guard’s collaboration with our state partner, Croatia, in technical cyber training is in its seventh year. In 2018, for the first time as part of this ongoing training, participants conducted a cyber exercise to put into practice the cyber defense skills taught in the class.

Information technology specialists from the Minnesota Army and Air National Guard attended the 2018 Croatia Cyber Security Symposium which brought together academic leaders from the University of Minnesota and University of Zagreb, as well as leaders in industry from General Mills to provide current, relevant instruction for the protection of critical infrastructure.

In 2018, the Minnesota Army National Guard made a switch to the resilience training that has been taught to Soldiers for nearly a decade. In its place the Minnesota Army National Guard is conducting Ready and Resilient training that focuses on a streamlined curriculum meant to make the training more accessible and relatable to Soldiers at the lowest levels.

The new program pushes resilience training down to the squad level, with the squad leader in charge of leading discussions on topics like relationships, risky behavior and overall wellness. Squad leaders are provided a booklet to help guide discussion and encouraged to tailor the training to issues identified in the unit risk inventory.

The new training is part of a larger focus to identify and mitigate mental health issues across the force. The Minnesota Army National Guard has trained suicide intervention officers, resilience trainers and victim advocates in every unit across the state.

The Minnesota National Guard also focused on educating the force on its sexual assault prevention and response program in the last year. We hosted nationally-recognized speaker Johnnetta McSwain, who spoke to our Soldiers and Airmen about overcoming adversity. Our sexual assault response coordinators participated in events in the community, educating stakeholders about military sexual trauma.

In our efforts to decrease the number of sexual assaults and mental health crises within our organization, the adjutant general tasked the force to document and learn from each case in which our Guardsmen are in crisis or at risk. Lessons learned from these cases are shared without identifying data quarterly to our leadership to ensure that we can provide a better outcome for Guardsmen in the future.

The Minnesota National Guard is committed to providing a workplace that is safe from internal and external physical threats and harassment. The MNNG must be cyber aware so as to execute sound practices that mitigate cyber-based threats. The organization has been entrusted with Minnesota’s most precious resources: the men and women who are the future of our state and nation. We demand a culture free of harassment and sexual assault. Additionally, we cherish and value the lives of all of those who serve in the Minnesota National Guard and vow to uphold all aspects of resiliency, in particular, assisting with service member health and suicide prevention.