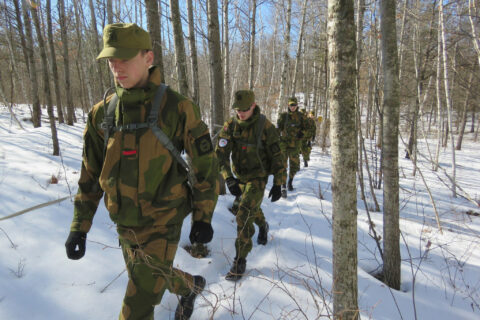 CAMP RIPLEY, Minn. (Feb. 16, 2017) -Youth of the Norwegian Home Guard experienced some of Minnesota culture along with focused military style training during the first week of NOREX 2017.

The U.S.–Norway reciprocal Troop Exchange, which began Feb. 9, 2017, annually swaps approximately 100 Soldiers and Airmen from the Minnesota National Guard and a like number of Norwegian Home Guard soldiers as well as youths to experience each other’s training, military lifestyle and most importantly, culture.

As part of the same training plan that was established in 1974, the NOREX has encouraged the introduction and familiarization of U.S. military normal operating conditions to members of the Norwegian Home Guard. As part of the Home Guard the ‘Youth’ conscription personnel are not official service members, but orientate themselves of proper customs and courtesies, knowledge of military equipment and survival in order to progress more efficiently should they choose to pursue a career with the Home Guard.

Since arriving in Minnesota on Feb. 10, 2017, the youth platoon has been through several classroom briefings, educational demonstrations and fun activities. Everything from dodgeball and team sports to tours of the many facilities on Camp Ripley to include the Minnesota Military History Museum.

“Everyone takes on each challenge and task with such enthusiasm,” added Farniok. “They are open to so many new approaches and excited about trying new techniques.”

During their time in Minnesota the Youth Platoon will compete in the North Star Stakes, a team-building and cohesion completion that has been around for nearly as long as the exchange itself.

Each squad Red, White and Blue accumulates points based on performance, professionalism, bearing, resiliency and creativity.

As of early this week, which marks the first full week of the exchange, the Youth Platoon has competed in land navigation, vehicle simulators and individual weapons instruction. They will also take part in the upcoming biathlon which will be executed on foot as opposed to skis due to the lack of snow.

The final results of the North Star Stakes competition will be revealed at the farewell banquet Feb. 19 with a plaque being added in recognition of the best youth unit.