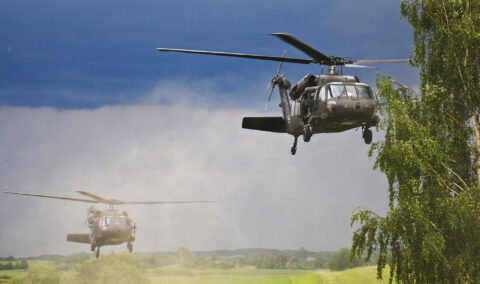 PABRADE, Lithuania (June 23, 2017) – At the sound of 17 U.S. Army rotary wing aircraft humming through the air, Soldiers of the Minnesota National Guard’s 2nd Combined Arms Battalion, 136th Infantry, in addition to Service members of five NATO Allied countries, load onto Black Hawk, Chinook and Apache helicopters, at Kazlu Ruda airstrip during the Saber Strike exercise, June 17, 2017. The multinational effort came together to conduct an air and ground assault in the Suwalki Gap to demonstrate the nations’ capability to respond to any hostile act of a potential adversary.

“You could tell on everyone’s faces that this was go time,” said Sgt. Derrick Bruestle, a team leader for 2-136th CAB, also known as the Bearcats. “It wasn’t just a training exercise to them anymore, it was a serious mission with real implications on the real world.”

The magnitude of the exercise set in as the first bird lifted off the airstrip and started moving toward the objective in a staggered formation. Saber Strike is a U.S. Army Europe-led NATO exercise meant to exhibit a strengthened partnership of the military assets of the NATO Alliance.

“For a National Guard unit to come out here and be in the spotlight is a big deal for us because we get to work with our foreign partners, engaging in the same mission and working together shoulder-to-shoulder for the betterment of the coalition,” said Bruestle.

After arriving at the landing zone, the coalition force moved across numerous fields, ditches and dense forest, covering upwards of six kilometers through periods of pouring rain. The effort was set toward their objective where they would lay wait, uniforms saturated with water and the crisp evening air setting in a chilling factor, until dawn when they would attack through the opposition force.

“Despite spending a night in the woods, soaking wet, with almost no sleep, the Soldiers kept their morale up,” said 1st Lt. Andrew T. Klein, the platoon leader of 2nd platoon, Bravo Co., 2-136 CAB.

With an early morning sunrise and fog-filled air, Klein’s troops prepared for the ground assault alongside their multinational partners. Precisely at 7:00, assisted by British, Portuguese, Croatian and Lithuanian forces, the first shot was fired. Within 30 minutes the enemy had been over run and the objective was seized.

“Working with foreign allies and this level of integration is a once-in-a-career type of exercise for most of these men,” stated Klein. “We hear about our NATO allies and other parts of the world on the news and this has given us a completely new perspective on how we all work together to form a stronger team.”

Once seizing the objective, security was set up for a Forward Passage Of Lines to the Polish 15th Mechanized Brigade. The FPOL is a battle handoff conducted after securing a main supply route for the reinforcement of foreign troops to the northeast. Once completed, the 2-136th CAB and the rest of the Allies are able to declare mission complete.

“All I can say is that I hope that missions like this continue to come our way,” said Bruestle. “The Minnesota National Guard is nothing to be taken lightly or underestimated. People recognize that and it’s why we get these types of missions. The more they give us, the more we’re going to shine; it’s as simple as that.”