Minnesotans, And Croatians, Take On The 2021 Best Warrior Competition 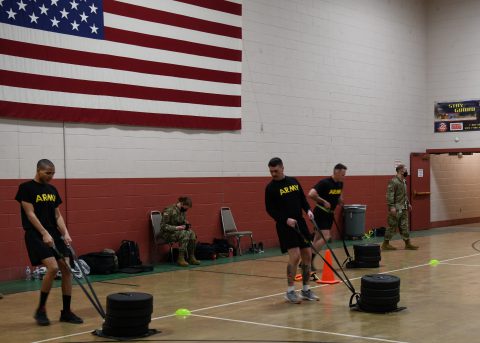 The competition tests the physical and mental capabilities of the participants, both junior enlisted soldiers and non-commissioned officers, or NCOs. Everything from a ruck march to assisting a casualty was on the menu for this year’s competitors.

Master Sgt. Steven Wegleitner, the NCO in charge of this year’s competition, believes the value of Best Warrior goes beyond this weekend.

“A lot of soldiers, or NCOs, haven’t had the opportunity to do this stuff and maybe it gives them some ideas that they can take back to the units that may be implemented to training,” he said.

This year marks the 25th anniversary of Minnesota and Croatia’s partnership under the National Guard State Partnership Program, and for the first time ever, Croatian soldiers took part in the competition.

Three Soldiers earned the right to participate based on past performances in Croatia’s version of Best Warrior, and were recommended by their organization’s NCO corps.

Command Sgt. Maj. Tihomir Slanac accompanied the Soldiers to Minnesota and thinks the experience will benefit them, “It’s good to see another way of doing things, and other equipment; and it’s good for them to see they are not less valuable than anybody else.”

Unlike the Minnesota National Guard’s Best Warrior Competition, the Croatian version of the event is more linear. The two day event begins with weapons qualification and other Soldier tasks, while day two consists of physical aspects like the ruck march and obstacle course.

The Croatians adopted to those differences seamlessly and Command Sgt. Maj. Slanac noted that his group felt welcomed in Minnesota.

“We really enjoy being here,” Slanac said. “You have really great NCOs. They’re really nice to us, so we really feel at home.”

Minnesota Army National Guard Sgt. Maj. Jason Rost pointed out some of the benefits of the nearly 25-year-old partnership.

“The state partnership program benefits Soldiers and Airmen across the Minnesota Army National Guard through multicultural exchanges, which allows them to have experiences with their Croatian partners and test and learn new skills and techniques to help them improve the job proficiencies.”

Not surprisingly, the relationship between the Minnesota National Guard and Croatia will continue to evolve,
“We have been invited to participate in their competition for several years, and this allows us a cross-cultural exchange which develops an appreciation for both cultures and countries,” said Rost.

The competitors began the competition with an inspection board on Thursday before kicking into high gear on Friday. After a grueling physical fitness test, they headed to the range for a stress fire, which was immediately followed by land navigation.

The packed Saturday schedule included assisting a casualty, two obstacle course iterations, and a 10-mile ruck march. The day culminated with a well-deserved Black hawk ride back to cantonment.

The 2021 Best Warrior Competition culminated on Sunday with an awards ceremony before competitors headed for home.

Pfc. Buckner and Cpl. Ellingson will advance to the regional Best Warrior Competition, with hopes of moving onto the national competition later this year.