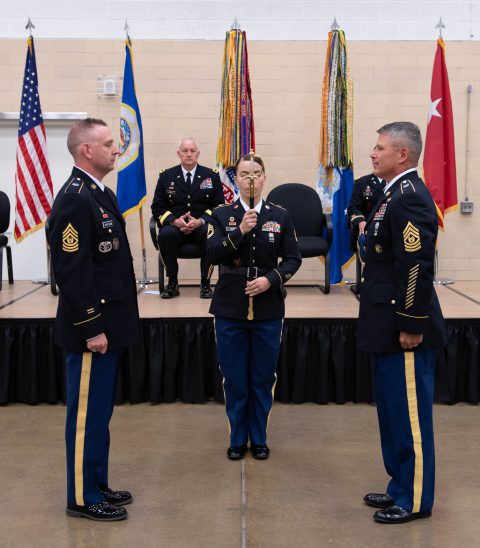 “Today, we transition from one leader to another, one skillset to another, with the same dedication to our Airmen, our Soldiers and to our families that is unwaiverable,” said Maj. Gen. Jon Jensen, the Adjutant General of the Minnesota National Guard.

Command Sgt. Maj. Brian Soper will take responsibility as the Command Senior Enlisted Leader from Command Sgt. Maj. Douglas Wortham who held the position for five years and is retiring after nearly 32 years of service. Soper will serve as the advisor to the Adjutant General on all enlisted matters involving Soldiers and Airmen.

“Being selected as the Command Senior Enlisted Leader has been a very humbling honor as I am charged with leading the best NCOs in the National Guard,” said Soper. “I will not take this responsibility lightly.”

Soper is a native of Devils Lake, North Dakota, and enlisted into the Army in 1984. He began his career on active duty, then continued his service as a traditional National Guardsman in North Dakota and Minnesota. Soper’s most recent assignment was as the Senior Enlisted Advisor – National Guard, U.S. Army Pacific.

Wortham, who enlisted into the Minnesota Army National Guard in 1987, assumed the role of Command Senior Enlisted Leader in August of 2014. He served under two adjutants general and traveled across the state to visit with Soldiers and Airmen at every level.

“These past five years have been an honor and the highlight of my career,” said Wortham. “As you are well aware the Minnesota National Guard is an outstanding organization. The Soldiers and Airmen are professionals and I believe they all strive to be their very best each and every day.”

Jensen thanked Wortham for his service, his leadership and his friendship and welcomed Soper back to Minnesota with confidence in his ability to continue to develop the non-commissioned officers of the Minnesota National Guard.

“The commander-senior NCO relationship is an extremely important and very unique relationship in the U.S. Army,” said Jensen. “We are privileged and we are blessed with the NCO corps that we have in the Minnesota National Guard. Everything that we achieve as an Army and Air National Guard is because of our NCO Corps.”