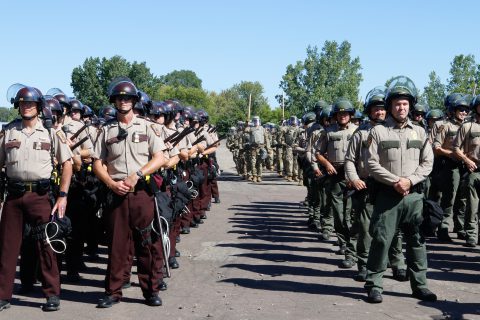 The exercise, designed to build on existing relationships formed by the teams during the events of the last few months and years, brought more than 200 attendees together to share tactics, techniques and procedures across the organizations.

“Strengthening these relationships is important in the long-term, especially in today’s environment,” said Battalion Commander Troy Fink. “We have done training with these other agencies, probably more in practical, real-world scenarios, such as the last state active duty mission.”

In addition to the battalion’s federal military role as an artillery unit, they also serve as a part of Minnesota’s National Guard Reaction Force (NGRF), prepared to respond at short-notice when called upon by the governor to support local authorities during incidents that exhaust local resources.

NGRF forces prepare for a variety of potential state missions including: site security, roadblocks and checkpoints, civil disturbance control, critical infrastructure protection, and personnel security. They also bring unique capabilities via specialty equipment beyond that which is typically issued to Soldiers and Airmen, including personal protective gear like face shields, body shields, body armor and shin guards. These units are also typically logistically self-sustaining for up to 72 hours.

Soldiers from the unit were some of the first activated as part of the historic mobilization of more than 7,000 Minnesota National Guard Airmen and Soldiers in support of local authorities during the recent unrest in the Twin Cities.

“Prior to that we did conduct state active duty for Super Bowl 52, conducting up to fifteen missions in the Twin Cities metro area, securing hotels and operating [traffic control points],” said Sgt. 1st Class Troy McFarland, who serves as the NGRF validator, training trainers within the units that make up the force. “We’ve got a lot of experience and we’re looking to gain some knowledge from our partners during this exercise.”

As Soldiers, conservation officers and troopers formed their ranks together and began running drills, observers could see that over the course of the exercise the partnering units improved with every iteration.

“That partnership that we’re able to form in the training environment transponds into the field experiences that we may encounter in the future,” said Minnesota State Patrol Capt. Joe Dwyer, who organized the event. “It’s not very often that we get to work hand-in-hand with our Soldiers, and this is just a great experience for both the state enforcement agencies to come to the table to work with our Soldiers of the Minnesota National Guard, and we’re just very grateful for that opportunity.”