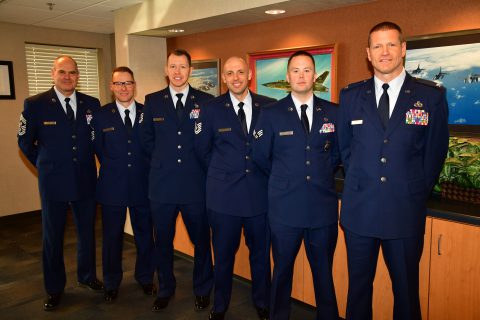 January 14, 2020 (DULUTH, Minnesota) — A small ceremony held at the 148th Fighter Wing, Duluth, Minnesota acknowledged this year’s Outstanding Airmen of the year statewide on Friday, Jan.11, 2020. Members of the 133rd Airlift Wing and 148th Fighter Wing gathered in support of their 2020 Outstanding Airman of Year nominees. Each wing selected candidates based on their job performance, leadership, community involvement and personal achievement during 2019. The awards honor the airmen’s accomplishments as well as highlight their dedication and devotion to duty.

“The Outstanding Airmen of the Year Program is a chance to recognize the achievements of our airmen and show gratitude for what they have done to lead, train, and support our fellow airmen and communities,” stated Minnesota State Command Chief Master Sgt. Mark Rukavina “It is for those individuals that go above and beyond their primary duties to become future leaders within our organization.”

The selecting board consisted of the previous year’s category winner, the 133rd Airlift Wing and 148th Fighter Wing Command Chiefs and the State Command Chief. These airmen will now advance to compete at the regional level.

Story and photos by Audra Flanagan