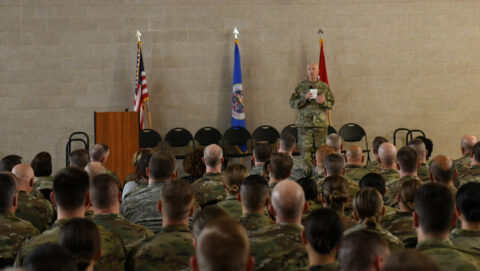 “This event and the transparency that comes with open dialogue is important to us as we join the effort to bring sexual assault and survivor support to the forefront of the community discussion,” said Jensen.

As part of the event, the organization released publicly for the first time its numbers of sexual assault cases between 2014 and 2018. In the five-year period, the Minnesota National Guard received 90 reports of sexual assault. Of those reports, 39 were restricted reports, which is an option Guardsmen have to report an assault without triggering an investigation and without identifying details about the victim or the incident being disclosed. Of the remaining 51 unrestricted reports, 35 cases involved Minnesota National Guardsmen as both the victim and offender.

Congresswoman Betty McCollum attended the event and spoke to the participants about her efforts on the Defense Subcommittee to address sexual assault in the military. She spoke about how critical it is that military members be able to trust each other, not just in combat, but as members of a team.

“If we’re really going to be respectful to one another, it’s not just in giving the salute or smiling at somebody,” said McCollum. “It’s making sure that that person knows that words won’t be used to hurt or insult them and that their physical body is going to be respected.”

McCollum challenged those in attendance to help stand up to sexual violence in all forms.

“This is a national problem, folks,” said Representative Betty McCollum. “But we’re going to come forward and solve it and I think the military can lead the way. Who better than citizen-soldiers? You have a foot in both worlds and you can take what you’ve learned here and you can bring it to all of Minnesota.”

The Adjutant General has assembled a team to review all of the Minnesota National Guard’s internal policies and processes in relation to sexual assault prevention and response. The team will review all former cases and solicit input from victims and responders as to how the organization can improve. A summary of the findings and recommendations from the team will be made public.

This event is just the first step as the Minnesota National Guard seeks to enter the larger conversation about sexual assault in our community and to engage with local agencies and organizations to come up with better solutions to address this problem.

“The protection and support of our service members is the number one priority of the Minnesota National Guard,” said Jensen. “Our leadership team is dedicated to this principle and committed to ensuring our service members are able to serve in a positive and safe work environment.”