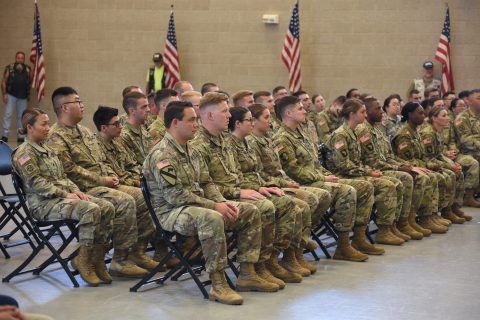 “I cannot express how proud we are of all your efforts,” said Col. Stephen Schemenauer, commander of the 347th Regional Support Group. “You represented the brigade, the state and the Army National Guard admirably, and your contributions to the war fight will forever be a part of our American history.”

The six soldiers from the Casualty Liaison Team 2 returned last week from Afghanistan where they were responsible for casualty reporting and accountability of U.S. Army Soldiers, Department of Defense civilians and contractors throughout Afghanistan.

The 25 soldiers from the 147th Finance Detachment returned to Minnesota in April after providing finance support and processing military transactions in five different locations across the Middle East.

“At the heart of our nation’s defense stands the citizen-soldier,” said Schemenauer. “It is a legacy deeply rooted in the American story, and that legacy of service has always made our nation, and the world, a better place.”

Leaders from the Minnesota National Guard thanked the families in attendance for their sacrifices while their service members were deployed, noting the critical role family support plays in the success of the soldiers’ mission.

“Thank you for your continued support,” said Schemenauer. “As citizen soldiers we cannot continue our legacy without you and we truly appreciate the personal sacrifices that you all made and continue to make to ensure our nation’s freedom.”