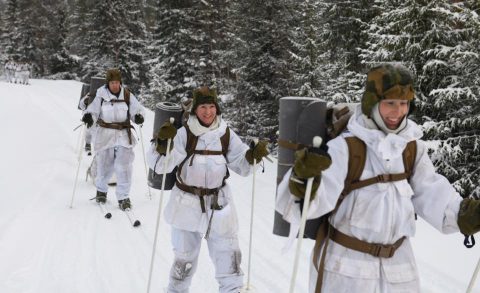 February 26, 2019 (ST. PAUL, Minnesota) –– Approximately 100 Soldiers and Airmen of the Minnesota National Guard returned from a two-week exercise in Norway recently, marking the 46th Norwegian Reciprocal Troop Exchange (NOREX) since the first in 1974. The annual event is the longest-running military exchange partnership between any two nations.

The yearly exchange promotes goodwill and sharpens military readiness between the nations while providing opportunities for cultural understanding among its participants.

“This is a chance for us to go into a winter climate and understand how we would live, survive, move and communicate –some of the basic elements within our training,” says Maj. Kyle Klosowski, the officer in charge for the Minnesota National Guard.

He went on to say that the training is important training as most Minnesota National Guard members conduct annual training in the summer and therefore miss out on the basics of winter survival. In addition to winter survival training, the NOREX participants also conducted weapons familiarization with their Norwegian counterparts. To assist with cultural understanding, they visited cultural sites and spent a weekend with a Norwegian family.

“NOREX was an opportunity unlike any other to humble ourselves in an environment foreign to us and learn the basics of arctic warfare and survival,” said Spc. Joshua Reece, a NOREX 46participant and infantryman with C Co., 1-194th Armor Regiment, stationed out of East St. Paul, Minnesota. “I truly enjoyed connecting with our Norwegian NATO counterparts through training and socializing, learning the culture and history of the country, and having a uniquely unforgettable experience.”

During the same period of time, members of the Norwegian Home Guard traveled to Camp Ripley, Minnesota, to complete training that included joint domestic response exercises with local law enforcement.