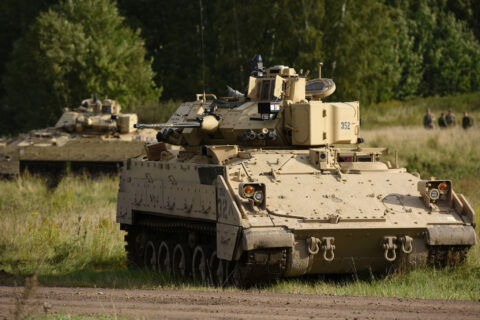 “The education and experience these Soldiers will receive is invaluable,” said Command Sgt. Maj. Shane Hybben, 1-194th command sergeant major. “Our Soldiers will have operated in joint forces operations with fire and maneuver, which will allow for best practices to be shared and used in the future. They will have a better understanding of other military forces and how they operate not only strengthening our force but everyone involved.”

The Brainerd-based battalion spearheaded the mission to Sweden as the most recent element of the 1st Armored Brigade Combat Team, 34th Infantry Division to have taken part in joint international training missions throughout Europe since early 2017.

“This is a unique and prestigious opportunity to represent a part of the American Armed Forces working with our European neighbors,” said Lt. Col. Tadd Vanyo, commander of the 1-194th.

The exercise, known as Aurora 17, is a national defense exercise organized by the Swedish Armed Forces and is the first national event of its type to be conducted in over 20 years. The participation of French, American, Finnish, Norwegian, Danish, Estonian, Latvian and Lithuanian Militaries are to cooperatively challenge Sweden’s defense capability by simulating an experienced, multi-faceted opponent.

Kicking off September 11, 2017, more than 19,000 Swedish military men and women interacted as part of the exercise assuming defensive and offensive duties related to the various scenarios. One of the purposes of Aurora 17 is the collective training of the Swedish armed services as a joint capability ready to meet a potential attack. At the same time, the exercise is also an important indicator for the overall determined defense Sweden.

Aurora 17 is being conducted by naval, air and ground forces along with several other agencies working in cooperation for the greater defense of Sweden. Units from all over the country are involved to include the Swedish Home Guard and reserve force. The main exercise areas will be between Mälardalen and Stockholm, on and around Gotland, and the Gothenburg as well as several areas along the coast.

“In order to strengthen our national defense, and exercise our capability to face an attack on Sweden, participating units will move to, and exercise in, areas outside the Armed Forces’ own exercise and training areas,” according to information put out by the Swedish Armed Forces.

Of the several American units joining the exercise, Minnesota National Guard Soldiers of the 1st Combined Arms Battalion, 194th Armor began their mission in Skovda, Sweden, during the first week of September. Tanks, mechanized infantry and supporting elements of the battalion met with and trained alongside their Swedish counterparts learning and adapting to the new environment.

“The Soldiers are really taking full advantage of the opportunity to learn from our hosts,” said Maj. Chris Bingham, executive officer and for the 1-194th and the senior American officer for the exercise.

Throughout the day the American troops from Minnesota worked to prep their vehicle and equipment as well as take time to learn a little more about the culture of Sweden.

“More than two-thirds of our formation has never left the U.S., so this will be a great educational experience for them both professionally and personally,” added Bingham.

Made up of multiple elements of the 1-194th, the 180 Soldiers of the battalion form the backbone of a lethal Armor-Mechanized fighting force with the mission intent of conducting realistic training mission with and against their Swedish counterparts.

Each vehicle and individual Soldier dawned MILES gear as part of the simulated war games. These electronic transmitters will represent the actual firing of the weapon systems ranging from individual rifles to tanks, artillery and aircraft. Additionally, the systems will indicate when a soldier or vehicle has been wounded, killed or destroyed as part of the live simulations.

“This has been the best opportunity for dynamic training where we got the chance to engage unpredictable opponents and learn the best ways to react to their tactics,” said Capt. Jason Laackmann, commander for Company C, 1-194th, based in East St. Paul. 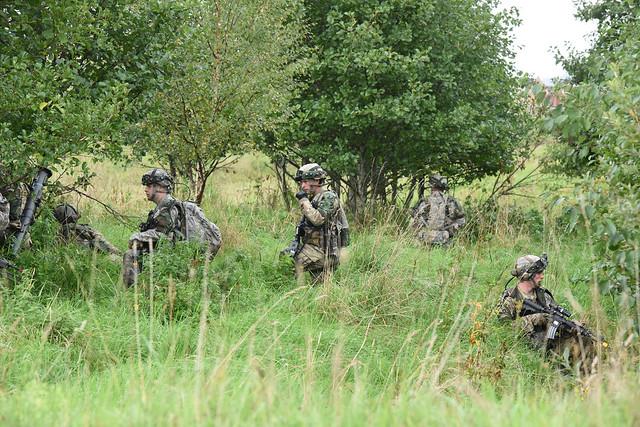