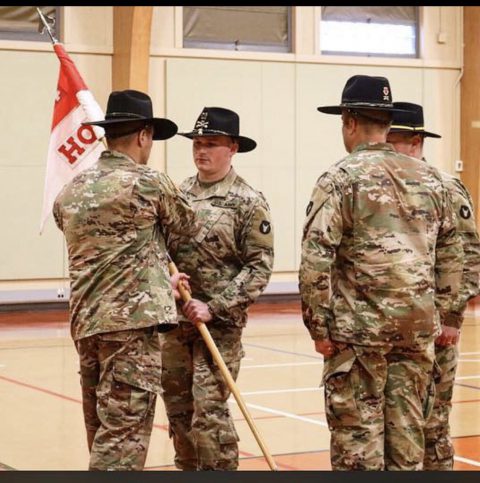 June 24, 2019 (DULUTH, Minnesota) — “The Minnesota National Guard is an organization that cares about all its soldiers,” said Capt. Forrest Jennings, commander of Headquarters and Headquarters Troop, 1-94th Cavalry. “The biggest thing anybody cares about in the National Guard is that you’re going to do your job and that you’re going to have their back when it matters. As long as you do that, people don’t care you know, anything about your personal life, so long as you’re a good soldier.”

In addition to his role as a commander, Jennings also serves as the assistant training officer for the 1st Squadron, 94th Cavalry in Duluth and serves as the advisor to the Minnesota National Guard’s LGBT Special Emphasis Council.

Jennings commissioned in 2013 from Oklahoma Christian University in Oklahoma City and attended the armor officer basic officer leadership course at Fort Benning, Georgia. He served in the Oregon National Guard before transferring to the Minnesota National Guard.

“I kind of always knew I was going to join,” said Jennings. “I just knew that I wanted to do something that mattered and something that could help people.”

Jennings credits one of his senior NCOs for helping him to feel comfortable coming out as gay to his unit. He told a few of the senior staff in his unit that he was gay and that he was thinking of bringing his boyfriend to the unit’s Christmas party.

“He said it wouldn’t be a big deal and it ended up not being a big deal,” said Jennings. “I was really worried about it, but as soon as I walked in the door, and everybody kind of welcomed me and they were excited to meet this person who I cared about, and it had a really positive impact and since that day I’ve never really looked back on being out of the closet in the military because I’ve had really positive experiences.”

When Jennings joined the military, Don’t Ask, Don’t Tell, was still an active policy. He and others during that time joined knowing that they might not ever get to come out openly.