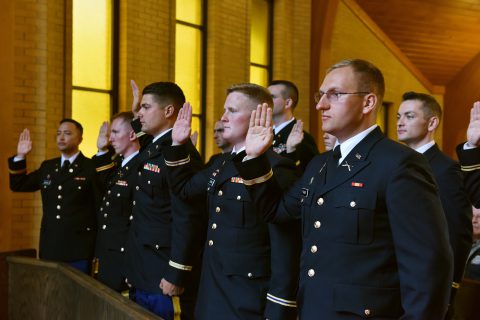 “They have been tried, tested and proven capable of being leaders of today’s Soldiers,” said Lt. Col. Aaron Cheadle, the battalion commander.

The program is executed over a 12 months – to include two annual training periods – with training on Camp Ripley and Joint Base Lewis-McChord in Washington. The cadre instill professional ethics; evaluate leadership potential; and challenge candidates mentally and physically. Those who qualify earn a commission as Second Lieutenants in the United States Army.

The guest speaker at this year’s graduation was U.S. Army Capt. Andrew L. Bundermann who served as the ground forces commander for Troop B, 3rd Squadron, 61st Cavalry during the Battle of Kamdesh in Afghanistan, Oct. 3, 2009.

“I envy you all and remember my commissioning well,” said Bundermann. “I was excited, nervous and really looking forward to it…I hope you are as well.”

Bundermann went on to recount some of his experiences as a leader in tough situations and in easy situations.

“Don’t worry about your next job, just work to be good at your current one; your leaders and soldiers will appreciate you for that,” said Bundermann.

Before family, friends and fellow soldiers, the 25 cadets of OCS Class 63 presented themselves to receive their diploma and be recognized for their hard work over the past year. Then each graduate took their turn at the front of the ceremony and welcomed their families to place their Second Lieutenant rank on their uniform for the first time.

“I leave you with one final thought,” said Bundermann. “Work your hardest to be the most capable you can in anything you do, not for you, but for those you lead.”