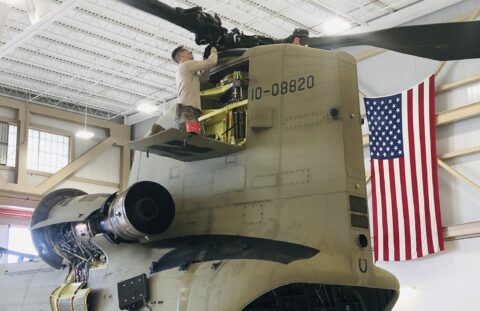 The Nebraska National Guard’s aviation unit is currently deployed to Afghanistan and requested support from the Minnesota National Guard. Areas of Nebraska have been heavily impacted by catastrophic flooding.

The 34th ECAB is providing helicopter mechanics, a maintenance test pilot, a CH-47F Chinook helicopter and crew to support the mission. Their primary focus has been transporting sandbags to reinforce a man-made levy protecting generators that power the cooling tower at the Cooper Nuclear Power Station near Nemaha, Nebraska. They have also aided in hay bale drops to feed cattle.

“It is a different mission than the our recent hurricane relief missions,” said Chief Warrant Officer 3 Thomas Knutson, a maintenance test pilot for the St. Cloud-based Company B, 2-211th General Support Aviation Battalion. “But this flood-fighting mission is exactly what we have trained for back in Minnesota. We were able to ‘hit the ground running,’ including our aviators, crew, and maintainers.”

“The experience has been great,” said Knutson. “The maintainers are skilled at the task, performing work they traditionally conduct at weekend drills and when deployed. The flight crew gains from an operational environment that requires integrating with other agencies as part of a complex mission.”

Community members, the welcoming party and volunteers on the ground have been very appreciative, said Knutson

The unit has mobilized several times in recent years to assist the efforts of other states.

“Our CH-47 unit is one of the most sought after in the National Guard,” said Col. Gregory Fix, the 34th Combat Aviation Brigade Commander. “Our well-trained, capable soldiers are always prepared to support states in the region.”