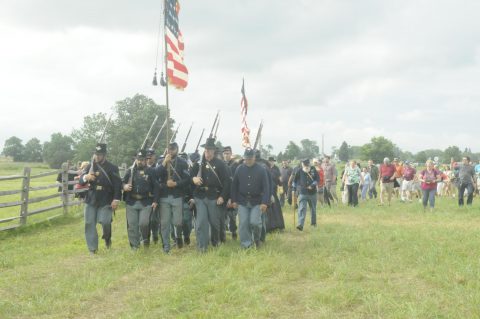 GETTYSBURG, Penn- The Plum Run ravine would be an insignificant tributary to an unknown river in a small Pennsylvania market town were it not for the Battle of Gettysburg where the First Minnesota Infantry Regiment charged a vastly superior Confederate force, sacrificing themselves to save the Union line This bloody valley was the setting for the first meeting of the Minnesota and Alabama military

“It was a great honor to be on the battlefield exactly 150 years to the minute of the fateful charge of the First Minnesota,” said Minnesota National Guard Adjutant General Maj. Gen. Richard C Nash “They played a key role as it appeared that Confederate forces were about to breach the Union line at Cemetery Ridge”

“Everyone knows about the Little Round Top action that we were involved in,” said the Alabama National Guard Adjutant General Major Gen Perry Smith “Not everyone appreciates the other event, Plum Run If Minnesota had not charged and sacrificed, we would not be these United States”

One hundred and fifty years later, the two sides met again on the same ground, but this time it was a friendly meeting between forces from two different states which often find themselves members of the same army in today’s conflicts

“Yesterday in a reenactment on the field, I met my friend and counterpart Major General Smith, the Adjutant General from the great state of Alabama,” said Nash “It was a pretty moving experience to reengage with the Alabama Soldiers who we fight alongside in our missions today”

Nash and Maj. Gen. Perry Smith, Adjutant General of Alabama walked together through the battlefield and visited the monuments and museums that honor the sacrifices made by both sides during such a significant event in our nation’s history

On July 2, 1863, Confederate forces had broken through a portion of the Union line and the Union forces were in full retreat General Winfield S Hancock needed to slow the Confederate advance in order to buy time for the Union reinforcements to arrive Hancock spotted the solitary eight-company First Minnesota which was held in reserve He ordered the First Minnesota to counter-charge Wilcox’s Alabama Brigade, knowing he may be sacrificing every man of the First Minnesota

Lt Lochren, Company K, First Minnesota Regiment, later wrote “Every man realized in an instant what that order meant – death or wounds to us all; the sacrifice of the regiment to gain a few minutes’ time and save the position, and probably the battlefield”

The first [Confederate] line broke in our front as we reached it, and rushed back through the second line, stopping the whole advance,” wrote Lochren[1]

The First Minnesota was outnumbered three or four to one, but the soldiers bravely faced the Confederates near Cemetery Ridge On July 3rd, the First Minnesota also participated in the repulse of Pickett’s Charge, which marked the end of the Battle of Gettysburg and a turning point in the Civil War.

The human cost of those actions was considerable: the latest calculations estimate 289 men made the charge and 233 were casualties[2]

The First Minnesota was lauded for its actions at Gettysburg General Hancock who had ordered the fateful charge said of the soldiers afterward, “No soldiers on any field, in this or any country, ever displayed grander heroism[3] There is no more gallant a deed recorded in history”[4]

In 1928, President Calvin Coolidge dedicated a memorial to Col William Colvill who commanded the First Minnesota at Gettysburg In his speech, he remarked that, “Colonel Colvill and those eight companies of the First Minnesota are entitled to rank as the saviors of their country”[5]

Though much has changed in the past 150 years, the need to pause and reflect on the history which led us to this point remains The Minnesota National Guard strives to honor the service and sacrifice of the citizen-soldiers that we trace our roots back to – the First Minnesota Infantry Regiment