From Ground to the Air – Thirty One Years of Service 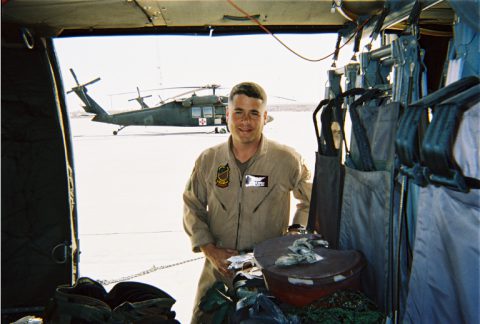 September 3, 2020 — Spanning a career of over 30 years, Chief Warrant Officer 5 Jason Wright shares experiences working his way from the ground up – quite literally.

Wright began his career as an enlisted Cavalry Scout (19D) with the 3rd Armored Cavalry Regiment (ACR) back in 1989. His first deployment experience stands out to him in memories of living out of a M3 Bradley Fighting Vehicle for nine months leading up to the start of Desert Storm.

“We didn’t have much of anything let alone food and water, but when I was a young private and thought this is the way the Army is,” said Wright. “I actually enjoyed it a bit at times, naïve I guess you could say.”

While embracing the hardships of a ground element in an austere environment, Wright says he would often look up and wonder how the view was from up there.

“I do remember seeing the helicopters fly right above me in battles, especially the Cobras and the Apaches, and as I am slugging it across the desert dunes in a track vehicle…I remember thinking it sure would be nice to be up there crossing this ground so quickly and above this mess,” said Wright.

Twelve years later Wright sat in the cockpit of a UH-60 Black Hawk Helicopter with the 49th Medical Company Air Ambulance in support of the 1st Marine Division under Major General James Mattis, who would later become 26th U.S. Secretary of Defense.

“I was very busy and lived on my helicopter with my crew for months, once again searching every day for food and water and fuel and praying my flying chariot did not let me down,” said Wright. “It darn near killed me many times over and I’m grateful to be alive.”

Today, Wright takes a different role in Army aviation by guiding others to be successful. He serves as the Brigade Aviation Maintenance Officer for the 34th Combat Aviation Brigade with the Minnesota Army National Guard, and is currently deployed the Middle East where his unit has been supporting Operation Spartan Shield and Operation Inherent Resolve.

“My favorite part of my job is learning something new each day, no matter how small that is, but I get the most joy out of helping others succeed, then I succeed,” said Wright. “If I can train, teach or pass on knowledge to someone and they benefit from it, that’s food for the soul to me.”

When asked about advice that he would have for fellow service members he added, “be responsible for yourselves, have integrity and own what you do and who you are.”

With 2020 being considerably different from most years, in addition to being deployed, Wright maintains a positive outlook as we draw near to the close of our time overseas.

“I have met new people and worked with old friends, I have empowered others to see their potential and held them to it.”