CAMP RIPLEY, Minn. (Oct. 5, 2016) – Hundreds of friends, family and fellow service members filled the Gen. John W. Vessey Recreation Center Oct. 2, 2016, at Camp Ripley to honor and recognize 19 members of the Minnesota National Guard who were inducted into the Court of Honor.

“Today was filled with remembrance and recognition,” said Sgt. 1st Class Kristen Tritz of the Training Support Unit on Camp Ripley. “It was very powerful.”

The Memorialization Board inducted not only five Minnesota National Guard leaders but also 14 soldiers who died while deployed overseas.

“I think the ceremony went extremely well. It was a very fitting tribute to all the new inductees,” said Maj. Gen. (Ret.) Jerry Lang, Memorialization Board chairman.

The Court of Honor on Camp Ripley has memorialized some of Minnesota’s finest soldiers since its establishment in 1933. The first inscription holds the name of Col. William Colvill III, who led the famed 1st Minnesota Volunteer Infantry Regiment at the Battle of Gettysburg in 1863. He later served as Minnesota Attorney General and is recognized along with other survivors of the American Civil War, of the granite plaques that garnish the front of the Minnesota Military History Museum on Camp Ripley.

For the first time since its establishment the Soldiers Killed in Action were inducted into the Court of honor along with the traditional inductees.

“It’s truly an honor, in more ways than one,” said an emotional Command Sgt. Maj. (Ret.) Douglas Julin while looking across the images of the fallen Minnesota soldiers, many of which he led during his deployments to Iraq.

During the ceremony, Lang hung the memorialization medal around the inductees’ necks in recognition of their achievements and acceptance into the Court of Honor. For the KIA inductees, the medal was placed around the neck of someone on their behalf–for many, the parents of the fallen Minnesota Guardsmen.

“Thank you for this honor, and thank you for not forgetting,” said Pat Timmerman, mother of 1st Lt. Jason G. Timmerman, who died as a result of an IED strike on Feb. 21, 2005 in Iraq. 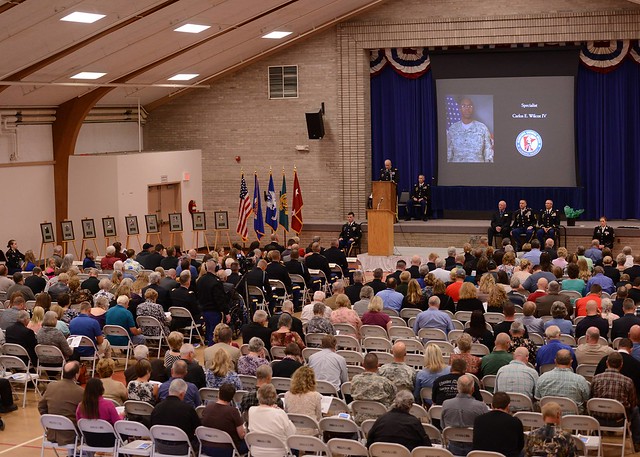