Accelerated officer school benefits Guard, proves to be good option for some candidates 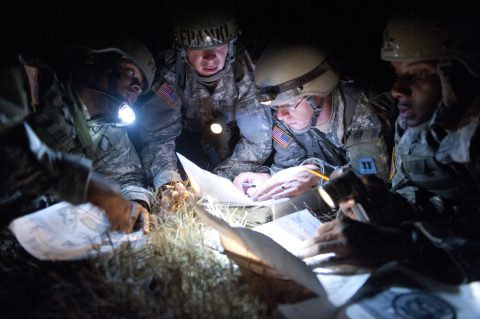 February 7, 2020 (ST. PAUL, Minnesota) — The most significant difference between the accelerated 501 Officer Candidate School and other OCS training is the pace. The students must accomplish the same tasks to the same standard but at a much faster rate. Where state OCS programs take 14 months, and Federal OCS takes 12 weeks, the accelerated course compresses the same instruction into 8 weeks.

The longer State OCS programs also allows for study time between drills. Because of these differences, the graduation rate for Accelerated OCS is approximately 60 percent compared to 80 percent for State OCS and 90 percent for Federal OCS.

“I am so glad I went all the way through in one shot,” said 2nd Lt. Johnathan Finnegan, a 501 graduate. “I knew for myself it was better to just dive right in and get it all done and focus on it. That way I don’t have a break and come back and have it harder. Plus getting it done in two months rather than 18 months was a great selling point to for career progression.”

Finnigan’s classmate 2nd Lt. Daniel Erickson also found the accelerated course tough but the timing was right. “If I couldn’t do the accelerated course I probably would have just stayed enlisted, he said. “It’s going to be tough and challenging in a lot of ways but its only eight weeks. You learn a lot more because you’re invested into it. You are there full time. With the 16-month course, there is a lot of work to do between training weekends. If you’re done with college or can take time off from work just do it. You’ll have nothing else to concentrate on for eight weeks.”

The Minnesota National Guard benefits from this program because quicker minting of new lieutenants improves unit readiness. The program is attractive to candidates who prefer immersive training rather than a staggered learning approach. They commission quicker without making multiple trips to Camp Ripley or committing to an additional month at Fort Benning, Georgia.

The program is open to both civilians entering service and current soldiers, but soldiers may be the best fit. Civilians have a high success rate with Federal OCS.

“Generally, accelerated candidates are current soldiers. Because of the physical requirements, we generally look for individuals who score 240-250 on their APFT,” said Homme. “I had almost 15 years of prior service,” said Finnigan. “I went in as an E-6 when I went in there and I thought I was prepared but wow, it was a wakeup call.”

Otherwise, requirements for accelerated OCS are the same as State OCS. Participants are expected to have a bachelor’s degree or graduate very soon. They must also be no more than 42 years of age when commissioned and possess a Secret or Interim Secret security clearance.

“They PT’d us,” said Finnegan. “Every single place you go you run. In order to eat a meal you did PT. To get through the doors you did PT. When you were finished eating you would wait in the front-leaning rest. It was very, very physical to weed people out. Once you get through the first two weeks, which was heavily PT-oriented, then it is a lot of classroom stuff with PT every hour for 13 hours straight.”

The cadre are trying to weed out those who are going to quit. “That is part of the high OPTEMPO,” said Finnegan. “If you can’t handle eight weeks of very intense OPTEMPO like that, are you going to quit on your guys in Iraq after two months of very little sleep and mission planning?” Erickson also experienced this challenge to his dedication. “They put a lot of obstacles in your way to make you want to quit,” said Erickson. Of the candidates that made it through the first week, more than half dropped voluntarily, but it left him with a better sense of his personal dedication.

The coursework was also challenging, but constructive. “You had to learn in the classroom,” said Finnigan. “There was no time to study. The hardest test was Military History. They crammed every single war America has been in since the War for Independence into two days. When you fail three tests or retests you’re done.” Erickson was fortunate to graduate with the academic award for highest overall percentage. “I just took good notes, asked questions and made sure I could actively apply what I had written down,” said Erickson. “I thought critically about how to apply the lessons to my situation.”

The candidates learned leadership from bottom up from the soldier’s perspective. “This is what your Joe is going to experience if you exercise poor leadership. When I come up with a mission plan I am experiencing how it is going to affect all levels. I have to think critically about implications.”

501 is a tough course but it can be done with the proper motivation. “It was one of the most stressful things I’ve done in my life,” said Finnegan. “You have to find your reason for making it through the long days and weeks with no sleep. For me it was the retirement benefits and the stuff I can transfer over to my family. I was not going to let sleepless night ruin what I could do for my kids. If candidates find whatever internal motivation they need to get through it they will be fine. They will have to remind themselves every single day.”

Finnegan advises prospective candidates do a lot of weighted running. “Other than people who quit themselves the biggest cause of dropping is bodies that quit. They have the motivation but their bodies quit them. Weighted running beforehand would condition their bodies to withstand that high intensity.” Erickson noted many candidates dropped because they did not have preparatory land navigation training.

Accelerated OCS is not a new program. In the last ten years the Minnesota National Guard has gained 52 new lieutenants through 501. Recently however, the rate has decreased from 19 graduates in 2011 to 10 in 2020. The goal of the Recruiting and Retention command is to increase the annual number by 5 or 10 lieutenants.

There are Accelerated OCS schoolhouses all over the country but the Minnesota National Guard sends candidates to either Fort Meade, South Dakota, or Fort McClellan, Alabama, depending on the time of the year. The Fort McClellan course starts each January and Fort Meade in June.