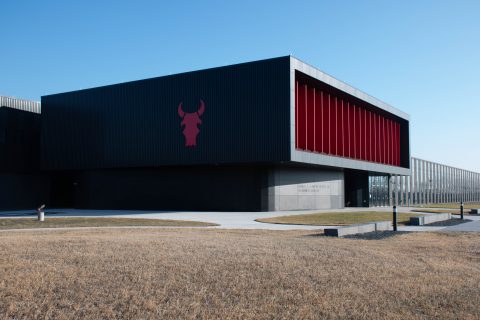 “This facility will provide a significant benefit for our soldiers, enabling us to continue to meet the needs of our state and nation,” said Maj. Gen. Michael Wickman, Commanding General of the 34th Red Bull Infantry Division. “We value our relationships with the communities we serve and look forward to working with the city of Arden Hills to strengthen our partnership in the future.”

Soldiers completed health screenings prior to arrival and temperature checks at the door as part of what have become normal operations during the COVID-19 pandemic. The soldiers are also required to wear masks and maintain social distancing at all times while they are conducting training.

The 149,000 square-foot facility was designed to incorporate all elements of the headquarters battalion into one location to accommodate growth in personnel, equipment and technology over the last decade. The building provides space for administrative, training, work and storage areas to meet the increased demands. Previously, the battalion was distributed between armories in Rosemount, Faribault and Inver Grove Heights.

The readiness center is located on the site of the Arden Hills Army Training Site, a 1,500-acre training area that serves military, civilian and law enforcement agencies.

The facility was constructed at a cost of $39 million and is designed with sustainability and energy conservation in mind to meet Leadership in Energy and Environmental Design, or LEED, Silver Certification standards. The site includes geothermal systems, photovoltaic arrays, and energy efficient equipment.

The facility is named after General John W. Vessey Jr., the 10th Chairman of the Joint Chiefs of Staff who served with the 34th Infantry Division during World War II. Vessey went on to serve for a total of 46 years, retiring in 1985 at the highest military position having served the longest of anyone then in the service.

The 34th Red Bull Infantry Division’s history of service to the state and nation dates from the Civil War through the present day. Beginning with the First Minnesota Infantry whose service and sacrifice at Gettysburg saved the Union Line, to the soldiers of the Sandstorm Division who were sent to fight on the front lines in World War I and the soldiers who earned the Division its Red Bull name for their service in Europe and Africa during World War II, to the Red Bulls of today who have deployed across the world in support of global conflict. The Division most recently deployed to provide command and control for Task Force Spartan in support of Operation Spartan Shield from 2018-2019.