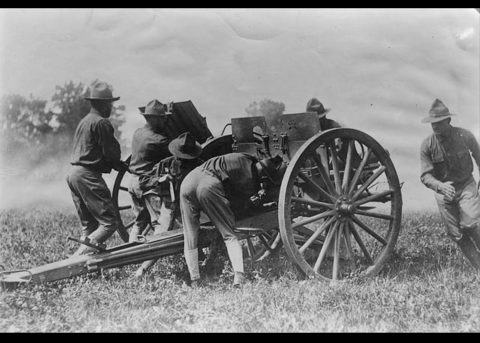 May 23, 2020 (ROSEMOUNT, Minnesota) — The Director of the Army National Guard, Lt. Gen. Daniel R. Hokanson, announced on April 29 the newest Division Artillery (DIVARTY) headquarters will be assigned to the 34th Red Bull Infantry Division. Re-activation for the 34th DIVARTY is scheduled for the fall of 2022.

Minnesota was not the only state vying for an artillery headquarters unit. Minnesota beat out 14 other states for the selection according to Lt. Col. Jonathan Grabill at National Guard Bureau. During the process of analysis, said Grabill, the Army National Guard (ARNG) “received application packets representing 15 very qualified states seeking consideration. The ARNG established a stationing criteria based upon the Total Army Analysis 22-26 with the goal of implementation of a Multi-Domain Operations capable force. Stationing criteria carefully analyzed and reviewed every application and then compared them on numerous variables based on long term readiness, the forces structure decision support tool, paid strength, recruiting demographics, life cycle management, infrastructure and enabler support.”

“The 34th DIVARTY will provide a single proponent within the 34th Infantry Division for standardized fires certification and leader development while increasing the lethality and capabilities within the Division Headquarters,” said Brig. Gen. Michael Wickman, 34th Red Bull Infantry Division Commanding General. “It is important to understand the capabilities we lost when the DIVARTY deactivated.  The DIVARTY Commander and his staff were an important part of the Division and ensured that our Field Artillery community not only maintained high standards, but that they also produced great leaders.  We are all looking forward to the DIVARTY return to the 34th Infantry Division.”