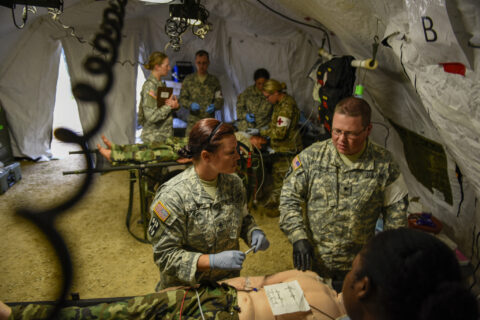 The 204th Area Medical Support Company, 147th Financial Management Support Detachment and 247th FMSD are all conducting their annual training periods in neighboring Wisconsin, with their own mission-specific exercises that fall under the Combat Support Training Exercise taking place throughout the brigade.

The leadership duo of Col. Lowell Kruse and Command Sgt. Maj. Marcus Erickson began their day with a stop at the 147th FMSD’s training area, where they watched Soldiers participate in the Diamond Saber exercise. Throughout the event, the 147th FMSD – a 25-Soldier operation preparing for deployment – is exercising its dispersing, military pay and contracting functions in an interactive environment with actual customers to serve and transactions to process.

“Thomsen’s unit is the most professional and ready to go,” Maj. Beltre, 101st Financial Management Support Unit commander, said of the 147th FMSD, commanded by Capt. Luke Thomsen. “Managing $72 million and having a zero balance, that’s no small thing.”

The 101st FMSU is acting as the headquarters element during Diamond Saber, overseeing five FMSDs taking part in the exercise.

The day included some well-deserved recognition for a few finance Soldiers who distinguished themselves so far, in addition to a lunch of grilled brats – a service the unit is providing to Soldiers training nearby that also helps bolster unit funds as Thomsen plans a Family Day and formal dining out later this year.

The 247th FMSD’s role in the Diamond Saber exercise is that of enabler, providing role-playing Soldiers that test the other FMSD’s to ensure they are processing pay correctly and adhering to policy.

Kruse and Erickson spent their afternoon with the 204th ASMC, undertaking the Operation Global Medic in a tactical environment complete with command post, sleeping tents and facilities to provide care for patients.

The 204th stood at the ready to receive simulated missions calling for ambulance services and medical care for other units occupying the assembly area. Their medical operation, decontamination procedures (for operating in a chemical environment) and ability to provide life-support services for other units were on full display.

All three units at Fort McCoy are conducting their training periods in conjunction with the 347th RSG’s other companies, located at Camp Ripley. They are collectively training under the Combat Support Training Exercise, a complex scenario that requires staff sections and headquarters elements to support and coordinate among units on the ground executing their missions. 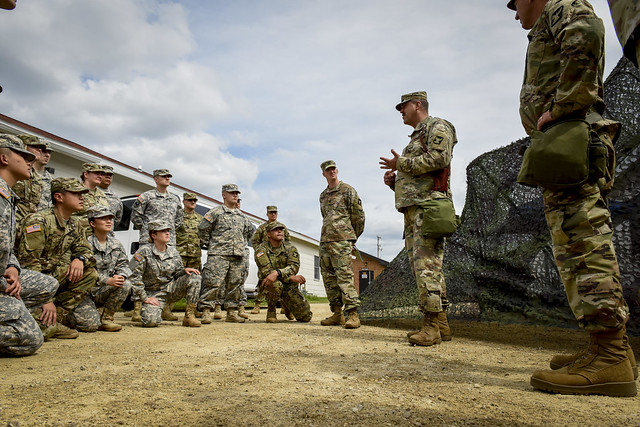