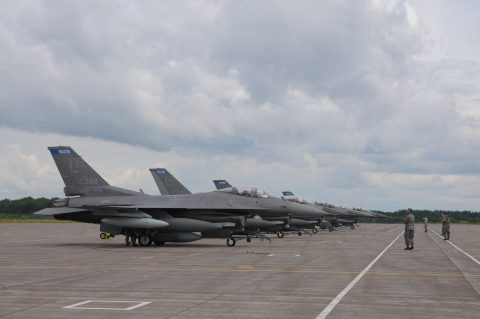 Jan. 28, 2019 (DULUTH, Minnesota) — The 148th Fighter Wing is in the process of hiring 52 full-time maintenance and support positions. The vast majority of the positions will be maintenance related and should help the 148FW in complying with the order from former Defense Secretary James Mattis, requiring an 80 percent mission capability rate by the end of fiscal year 2019.

The 148FW has already hired over half of the needed positions and anticipate that all the positions will be filled by the end of February 2019.

So, why is a mission capability rate important? In simple terms, it determines how many jets are available to fly. If you cannot fly a jet due to a maintenance issue, you either miss out on a real-world mission or a training opportunity for your pilots. In either case, the readiness of a unit is negatively affected.

Maintenance personnel and supply are the two main factors in determining a mission capability rate. Having additional Airmen to work on the jets should help improve the rate but you still have a variable in getting parts in a timely manner. “The more people you have…the more people you have to work on the jets that are broken,” said Lt. Col. Robert Troy, 148th Fighter Wing Maintenance Group Commander. “We believe that our mission capability rate will improve with the additional Airmen.”

Under the total force integration concept, the 148FW has received three active duty pilots that will train with the wing for multiple years before returning back to the Air Force for their next assignment and anticipate receiving two more. In addition to the active duty pilots, the wing hired three new drill status Guardsmen pilots creating an increased demand for time in the cockpit.

“Pilots require a minimum amount of sorties each month to remain combat mission ready and with more pilots we need to fly more sorties,” said Lt. Col. Nathan Aysta, 179th Fighter Squadron Commander. “The new pilots require a lot of instruction to accomplish a flying syllabus and to get them seasoned in the F-16. To do this, we need more personnel to train these pilots and more aircraft to support their required monthly sorties.”

With a fixed amount of jets and the increased need for sorties, the 148FW Maintenance Group is under pressure to maintain the current fleet so monthly flying requirements can be met. “The additional maintenance Airmen allow us to support a very aggressive flying schedule. Less experienced pilots require approximately 30 percent more sorties than an experienced pilot,” Troy said.

The 148FW will use the additional maintenance personnel to run a more robust second-shift. “We have always ran a scaled back night shift by taking assets from our dayshift,” said Troy. “The additional positions will allow us to patch up the holes on our day-shift and increase our maintenance fix capability at night.”

Wing members experienced an exceptionally high operations tempo in fiscal year 2018 in which half of its members deployed, most to locations in Southwest Asia. “If you don’t counter the consistently high operations tempo by either scaling back the mission or increasing the number of people to make things more manageable you are going to drive people away,” said Troy. “The morale part of these new hires is really important.”

“Now we can hire some of our drill status Guardsmen, people we have trained…hometown people with commitments to the 148FW that take pride in their work and community,” said Chief Master Sgt. Dawn Teachworth, 148th Fighter Wing Maintenance Operations Flight Superintendent. “There is a difference between cycling out every two to three years and being based here…the Guard is like a family.”

In 2011, community leaders represented largely by the Military Affairs Committee went to Washington, D.C., to advocate on behalf of the 148FW for an Active Association, known today as Total Force Integration. The original roadmap was to have four Active Duty pilots getting trained by the highly experienced pilots at the 148FW. The Active Duty Air Force planned to send 40 F-16 Maintenance Airmen to support the additional flying. “After a few years it was evident the Active Duty could not send the Maintenance Airmen due to some unplanned Weapons Systems staying in the inventory which effectively diverted those folks to other platforms,” said Col. Chris Blomquist, 148th Fighter Wing Commander. “Instead they fully funded the 148FW to hire 52 drill status Guardsmen to support absorption of these additional pilots.”

While the 148FW will be getting a majority of the new Airmen from its’ drill status Guardsmen pool, they will also bring in some people from out of state. Not only will these new hires be a welcomed addition to a weary full-time workforce but it will have a positive impact on the Duluth, Minn. economy. It is estimated that the additional hires will have an economic impact of nearly $5 million and will result in 20 indirect jobs. Also, the wing will need to add roughly another 400 flying hours annually to accommodate the increase in pilot training, generating another $4 million in operating costs.

The 148FW took a holistic approach in defining which work areas these positions would go to. Around 40 went into various Aircraft Maintenance functions. The other 12 went into areas such as Fuels, Supply, Operations, Communications, Security and Human Resources. “It takes many different types of specialties to put airplanes in the air…more than just pilots and maintenance are required to keep airplanes flying,” said Blomquist.

“The 148FW is thankful for the support we have locally and look forward to be leading edge innovators for our country,” Blomquist concluded.