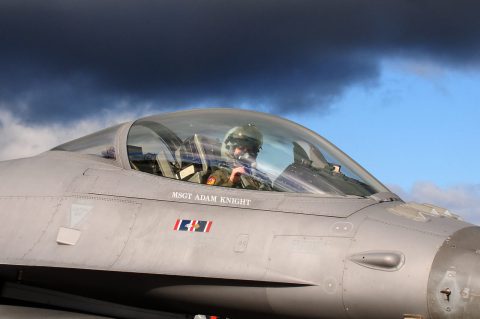 In January, United States Airmen and F-16s deployed to a location within the homeland to enforce Federal Aviation Administration-established Temporary Flight Restrictions, or TFRs. A TFR is a regulatory action that temporarily restricts certain aircraft from operating within a defined area.

NORAD, conducts aerospace warning, aerospace control and maritime warning in the defense of North America.  NORAD is a bi-national command focused on the defense of both the United States and Canada.  NORAD collaborates with homeland defense and law enforcement partners to prevent air attacks against North American airspaces by responding to unknown or unauthorized air activity approaching and operating within sovereign airspaces.

The 148th has a long history of supporting NORAD missions and well as the wing performed 24/7 Aerospace Control Alert at a fixed location from 1990 to 2013.

“This is not the first time the Bulldogs of the 148th supported Operation NOBLE EAGLE in a deployed location,” said Col. Chris Blomquist, 148th Fighter Wing commander “The wing and Minnesota National Guard take pride in providing America with mission-ready Airmen.”

“Our number one priority is to support our state and federal missions in order to safeguard U.S. national interests, especially in time of great need,” said Blomquist.

In 2007, when the Air Force fleet of F-15s were grounded due to structural issues, the 148th deployed jets and Airmen to Hickam Air Force Base, Hawaii to perform 24-hour aerospace control alert for three-months.  Later, in February 2008, the 148th deployed jets and Airmen to Elmendorf Air Force Base, Alaska for six-weeks where they performed 24-hour alert.  While there, the Bulldogs were the first F-16 unit to intercept a Russian Bear Bomber off the coast of Alaska.

The 148th has trained and exercised to be an Aerospace Control Alert-training flying wing.  In February of 2018 the Bulldog’s once again supported NORAD operations by securing the skies over U.S. Bank Stadium in Minneapolis during Super Bowl LII. In July and August of 2019, the wing partnered with NORAD, FAA and the Civil Air Patrol to realistic training in a controlled airspace.

“The Bulldogs performed all NORAD taskings with 100 percent mission effectiveness despite experiencing obstacles, like a pandemic disease striking the world’s populations,” said Thornton.

Once the COVID-19 outbreak accelerated, the unit restricted personnel to the base to reduce risk of exposure. When confirmed COVID-19 cases appeared in the local area, the team split Airmen into two shifts to better enable social-distancing and assigned specifying times to use the on-base dining facility, he said.

“The Bulldogs used a multi-layered air defense approach to protect the skies that included Active Duty, Army and Air National Guard, Department of Homeland Security, along with a host of several interagency partners,” said Joyce. “They performed their duties to a very high professional standard. We’re very appreciative of their mission dedication and exceptional people, aircraft, equipment and capabilities.”