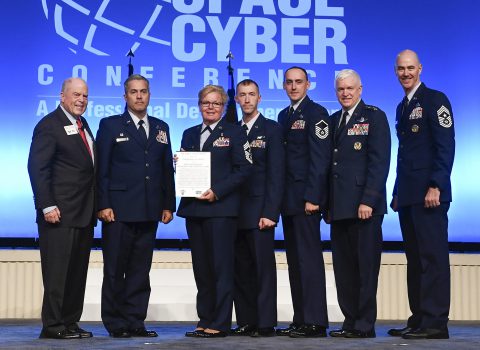 September 26, 2019 (DULUTH, Minnesota) – Earlier this month, the 148th Fighter Wing received national recognition from two professional military organizations. On September 2nd, the 148th received the 2019 Spaatz Trophy from the National Guard Association of the United States (NGAUS). The award is named after former Chief of Staff of the Air Force, Gen. Carl S. Spaatz and is awarded to the overall outstanding flying unit in the National Guard.

Selection of both of these awards is based on overall combat readiness during the calendar year 2018 and the unit’s performance with respect to all other Air Guard flying units. Factors included in the evaluation are flying safety; aircraft operation readiness; unit manning; skill level qualifications; retention; operational readiness inspections; outstanding accomplishments and special missions and exercises.

Members of the media are invited to the 148th Fighter Wing to interview Airmen and leaders who contributed to the Wing’s success during the award period on Thursday, September 26th at 10:45am.

The 148th Fighter Wing is a secure military installation. We require media outlets to provide full names and date of birth of journalists and/or photographers attending this event no later than 9:30 am on Thursday. For more information contact 218-788-7365.