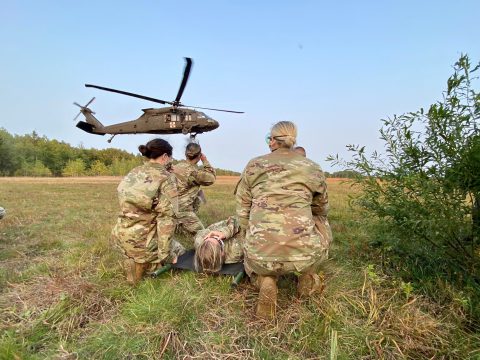 Medical Group personnel used MIST procedures to hand over casualties to Critical Care Flight Paramedics assigned to the 2-211th.  MIST is an acronym used by first responders when handing patients to the next level of emergency care.  The four parts of MIST are to identify the mechanism of injury, identify injuries found, identify signs and symptoms and communicate the treatment that was provided.

“Exercising wartime skills in a realistic training environment such as Camp Ripley is invaluable,” said Critical Care Flight Paramedic, Staff Sgt. Sandra Barg from the 2-211 General Support Battalion.  “Airmen are able to move safely underneath the rotor system and see our equipment as a medical unit” Barg added.

Master Sgt. Erica Olson, Health Service Administrative Technician with the 148th Medical Group utilized these processes during a deployment to Joint Base Balad, Iraq in 2007.  “Training like this provide valuable familiarization and trust in the transport process,” said Olson.  “It also gives medics a feel for the patient’s perspective,” added Olson.

“Today’s training provides perspective for the work that happens in the field,” said 148th Medical Group Commander, Col. Jeffrey Rengel who deployed to the 455th Air Expeditionary Medical Group at Bagram Airfield in 2007 and 2009.  “It’s an effective reminder that our day to day patient care is vastly different than what we may see in a field hospital,” added Rengel.